Some of the health benefits of spelt include its ability to help in regulating the body’s metabolism, aid in the creation of sex hormones, increase circulation, build strong bones, improve the immune system, boosting digestive function, lowering blood sugar, and reducing cholesterol levels in the body.

Spelt is one of the oldest cultivated crops in human history and is believed to have first been used between 7,000 and 8,000 years ago. Spelt is a variety of grain or cereal that is closely related to wheat. In fact, spelt likely developed from a hybridization of emmer wheat and wild goat-grass. It is closely related to normal “bread” wheat, but the popularity of bread wheat soon made spelt obsolete, which is why it is considered a “relic” crop. However, it is making a comeback as a health food, particularly in Spain, the United Kingdom, and other parts of Europe. It is packed with nutrients, vitamins, minerals, and essential organic compounds that other cereals and forms of wheat don’t contain, which might explain the renewed interest in spelt. The scientific name of this ancient food staple is Triticum spelta, but it is more commonly known as hulled wheat or dinkel wheat.

Spelt flour can be purchased at some supermarkets and most health food stores in England, the Netherlands, Germany, and in various parts of North America. The flour can be used to bake highly textured and nutrient-rich bread, as well as pasta and baked goods. In certain countries like Bavaria and Belgium, spelt is used to brew beer and has a unique, distinct flavour that many people enjoy. Obviously, as a minority product, spelt does have a slightly higher price tag, but it is worth it, not only for the health benefits, but also for the versatility in cooking.

Spelt flour is particularly preferred in making bread crusts or flatbread pizzas, as the wheat will harden without becoming tough or leathery like other varieties of wheat. Now, let’s look at what makes spelt such a healthy option in our diet.

Nutritional Value of Spelt
Aside from being a very functional and versatile variety of wheat, spelt is also packed with nutrients that many other cereals do not contain. It is high in carbohydrates, as you would expect, but the very high levels of protein (21% of your daily recommended intake) and dietary fibre (30% in a single serving!) are very impressive. On top of those important compounds, spelt also contains significant levels of iron, copper, manganese, magnesium, phosphorous, potassium, zinc, selenium, niacin, thiamine, vitamin B6, and folic acid.

The very high content of fibre in spelt means that it facilitates healthy digestion in a major way. Dietary fibre helps to bulk up your stool and move food through the digestive tract, speeding up the absorption of nutrients and helping to reduce conditions like constipation, bloating, cramping, excess gas, diarrhoea, and more serious gastrointestinal issues like ulcers. Spelt has one of the highest dietary fibre contents of wheat varieties.

The high levels of iron and copper in spelt combine to significantly boost circulation. Iron and copper are essential for the creation of red blood cells, and when RBC production is up, there is increased blood flow throughout the body, which means additional oxygenation to organs and tissues, increased healing, boosted energy levels, and a more functional metabolism. Increased circulation can even boost hair growth, while the iron content helps the body avoid becoming anaemic.

Niacin is one of the essential vitamins that can be found in significant quantities in spelt. Niacin plays a key role in the adrenal glands in the body, particularly in the production of sex hormones. The endocrine system is a sensitive and hugely important aspect of our health and general functioning, so maintaining healthy niacin levels by adding spelt to your diet is a wise choice.

Spelt has an impressive range of essential minerals that are necessary for bone health, including zinc, magnesium, copper, phosphorous, and selenium. These minerals contribute to the development of bone tissue and by boosting the levels of these minerals in your body, you can actively prevent osteoporosis and other age-related conditions that weaken or degrade the bones in our body.

The high levels of phosphorous, combined with the impressive content of protein in spelt makes this cereal very important for the development and growth of new tissues, blood vessels, muscles, bones, and organs. Phosphorous is one of the essential elements behind creating new proteins and making DNA to build new cells, while the proteins you get directly from spelt can be broken down into their composite amino acids and then re-formed to be used in the body for nearly every important bodily process.

Thiamine is known to significantly boost your immune system and stimulate the defensive mechanisms of the body, while also easing psychological stress and anxiety. Spelt is one of the few cereals that can boast a significant level of the B-family vitamin.

Although simple sugars and carbohydrates are known to be dangerous for diabetics, the high fibre content in spelt can counteract those effects and help to regulate the release and breakdown of those simple sugars into glucose. By regulating the release of insulin and glucose in the body, it helps to manage diabetes for those who already suffer from the condition, or prevent more people from developing it.

Despite these healthy benefits, spelt does contain gluten, which is the allergen that is responsible for Celiac disease. Therefore, people suffering from this condition should choose other grain/wheat alternatives. 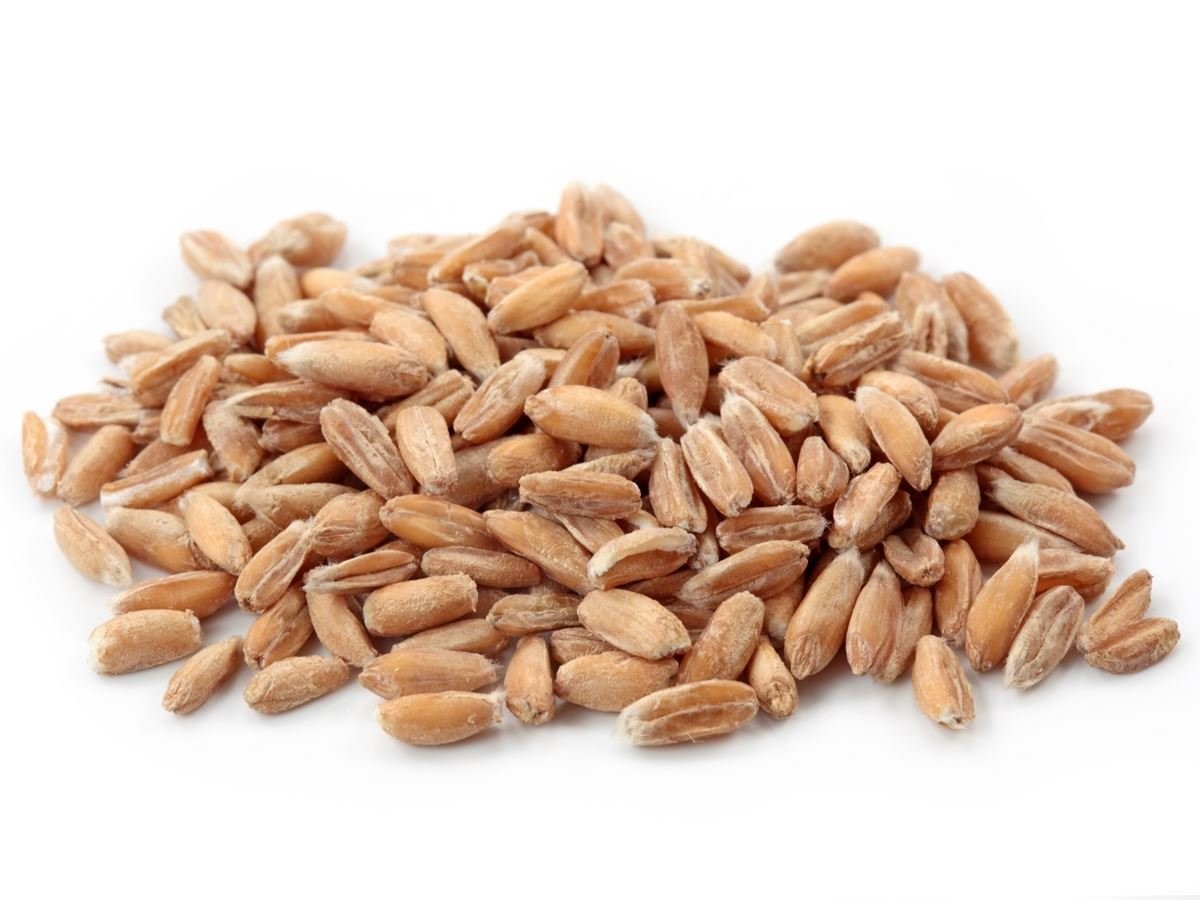 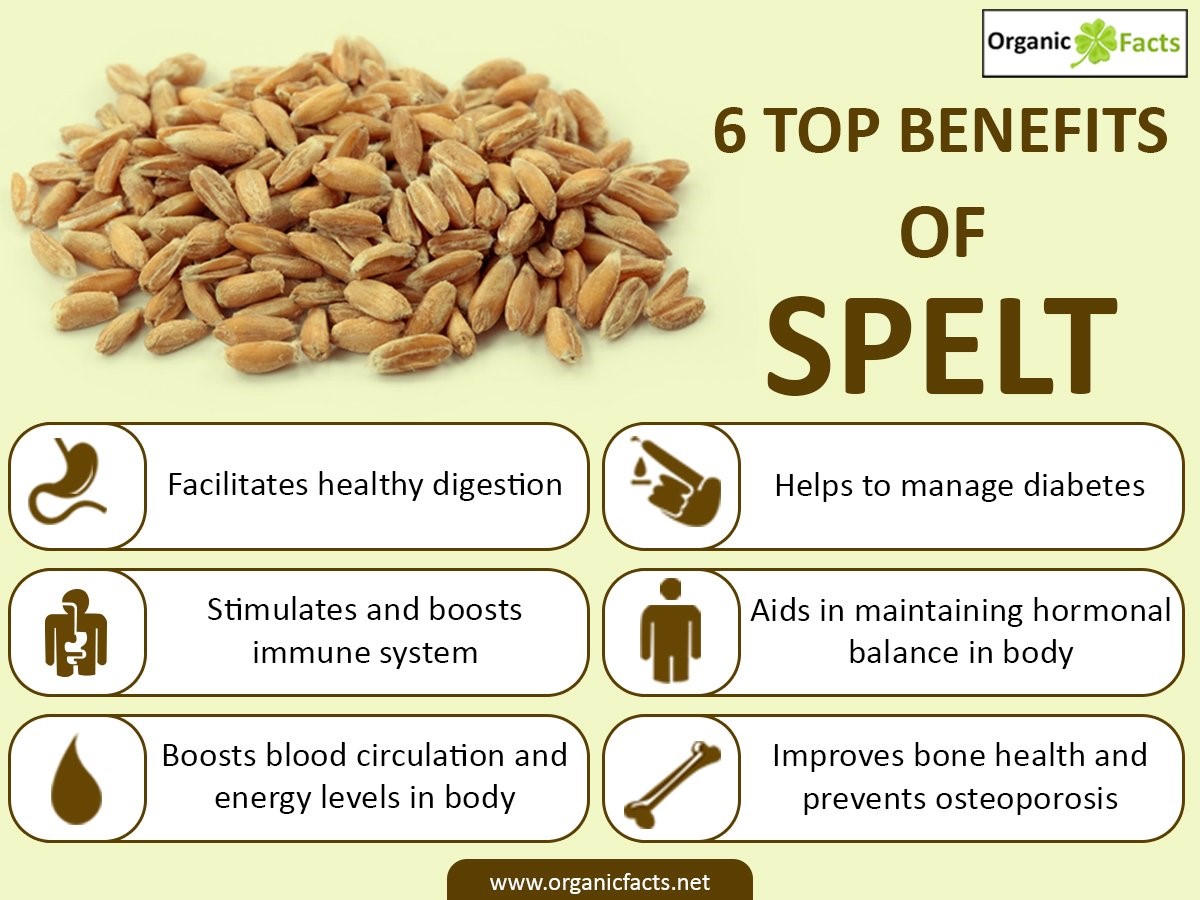