Food science has been an important area of science for many years, and one of the most interesting developments came in the late 19th century, when researchers bred wheat and rye together, which are two of the most important cereal/grain staple foods in the world, to produce triticale. The results were nothing short of spectacular. The intention was to gain the high yield and quality of wheat with the disease tolerance and unique nutritional composition of rye. What they found was that triticale actually has higher levels of most vitamins and minerals than either of their two contributing species, making it an ideal nutritional fodder food for livestock. Recently, however, it has become a popular health food for humans, also due to the fact that it is overflowing with beneficial nutrients. Triticale is commonly found in various health cereals, and can also be found in a number of different forms, either as the whole triticale berries, flour, cereal, bread, flakes, or crackers.

Despite its amazing health benefits and nutrient-packed nature, triticale is only produced in 29 countries around the world and the total harvest yield is 15 million tons, which is dwarfed by the totals for more traditional grain crops. Obviously, the breeding process is slightly more complex, making the initial production slightly more expensive, but once a steady hereditary line is put in place, it is basically the same cost as any other grain crop. The main producers of triticale are Poland, Australia, Germany, and France. Research is ongoing to further improve the growth and nutritional content of triticale. For now, let’s look at the nutritional content that makes triticale so valuable and healthy.

Nutritional Value of Triticale
This hybrid cereal option is more than just a scientific achievement. It boasts a higher content of dietary fibre, protein, and minerals than both rye and wheat, making it a veritable “super cereal”. Triticale is a rich source of manganese, iron, copper, zinc, phosphorous, calcium, potassium, and magnesium, as well as essential vitamins, including the entire B-family of vitamins in significant quantities and vitamin E.

For those people suffering from diabetes or at risk for developing the condition, triticale can help in a variety of ways. First of all, the high fibre content of triticale (50% higher than wheat or rye) means that blood sugar levels are balanced, which is the main issue for diabetics. The bloodstream is flooded with simple sugars and glucose which causes major problems; fortunately, fibre prevents this. Secondly, the huge content of manganese found in triticale is a second line of defense for diabetics. Manganese is a functional part of various enzymatic processes in gluconeogenesis, which is how the human body turns sugars into fuel, rather than absorbing it into the bloodstream. This provides us with more energy and more regulated levels of blood sugar.

As mentioned above, triticale is a very important source of dietary fibre (19 grams per cup), which makes it very powerful in terms of human digestion. Dietary fibre helps to bulk up stool, pass food through the digestive tract quicker, and speed up the process of absorption and excretion. This means that any toxins in the bowels are eliminated quicker, and it also increases efficiency of nutrient absorption, making room for more food (and hence, more nutrients). High fibre diets help to decrease constipation, diarrhoea, bloating, cramping, and other gastrointestinal conditions, even more serious ones like Crohn’s disease, gastric ulcers, and even colon cancer.

Red blood cells are key elements in human health, as they deliver the oxygen to all parts of the body, including vital organ systems, skin cells, and muscle tissues. Iron, copper, and folic acid are all necessary components in the production of red blood cells, and triticale has all three of these in significant levels. This means that RBC count and circulation increases, thereby boosting the speed of healing of various tissues and cells, improving metabolic efficiency, increasing hair growth, and providing the body with balanced energy levels.

Just as with fibre, triticale has a higher content of protein than either wheat or rye. This means that cell production throughout the body can be increased, metabolic and enzymatic processes can be optimized, and general bodily functions can be far more efficient. Proteins are the building blocks of cells, as they can be broken down into their component amino acids and then re-structured into whatever materials our body needs to stay healthy. Along with protein, triticale also contains manganese, folic acid, and a number of other nutritional elements that are essential for cell production.

Triticale is an impressive source of minerals, many of which play an important role in the production of bone tissue. Zinc, phosphorous, calcium, and manganese are all integral parts of bone production and strength in the body. People with frail bones or aging people who are experiencing age-related bone degradation would do well to add triticale to their diet, as it can significantly boost bone growth, speed up bone healing, and prevent conditions like osteoporosis.

The highest content of minerals found in triticale is manganese, and while this isn’t always the most discussed mineral in our diet, it is certainly a powerful one in these quantities. There is more than 300% of the daily recommended intake of manganese in a single serving of triticale. Manganese serves a number of functions, as already explained, but it also is a co-factor in manganese superoxide dismutase, which is a powerful antioxidant. High levels of manganese and this enzyme have been connected to a reduction in oxidative stress conditions, including asthma and various skin conditions.

Significant levels of folate in the body mean that pregnant mothers can protect their child from neural tube defects. The deficiency of folic acid (one of the B-vitamins) can be prevented by foods like triticale, which contain high levels of this beneficial and multi-functional vitamin.

Triticale, like wheat and rye, contain high levels of gluten, so those who suffer from gluten intolerance or allergies, such as Celiac disease, should avoid triticale and try other non-gluten health cereals that won’t cause severe allergic reactions and gastrointestinal trouble. 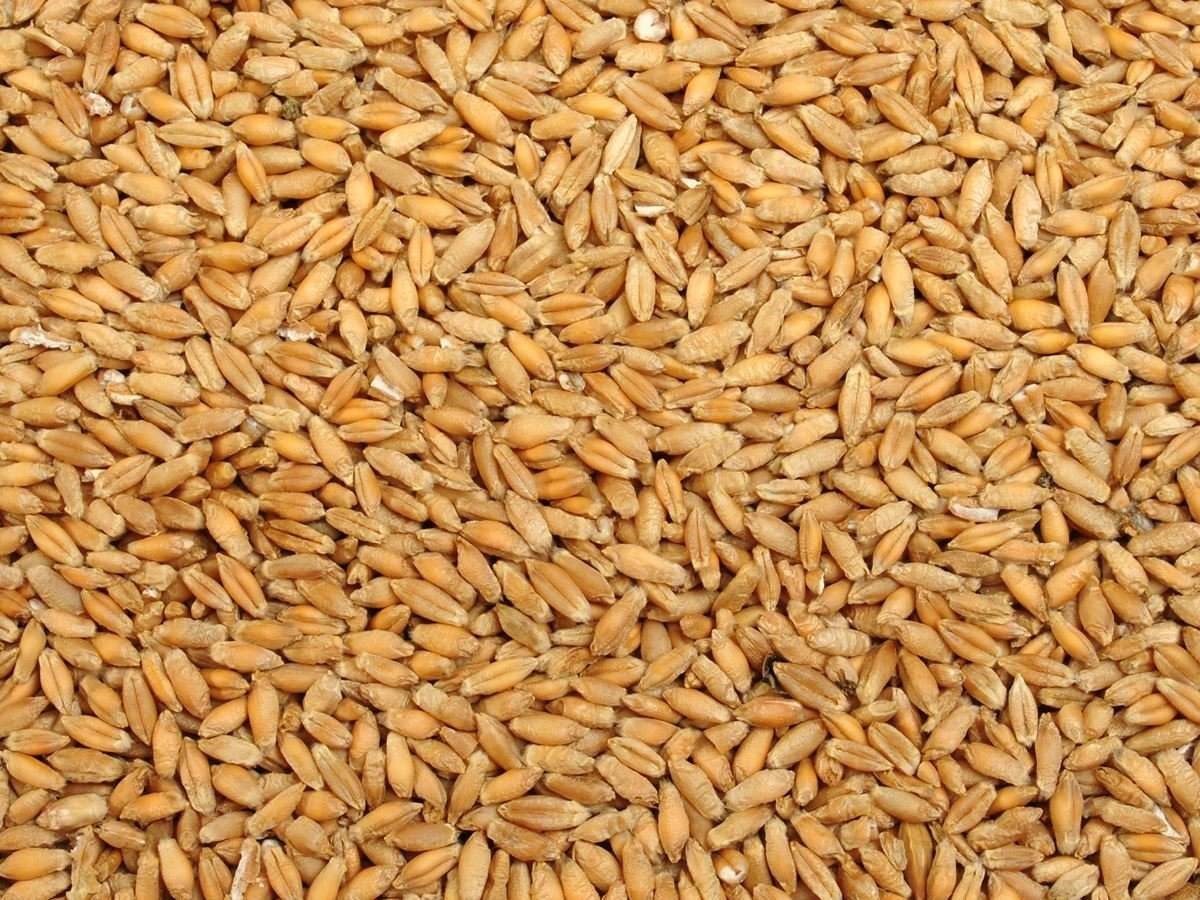 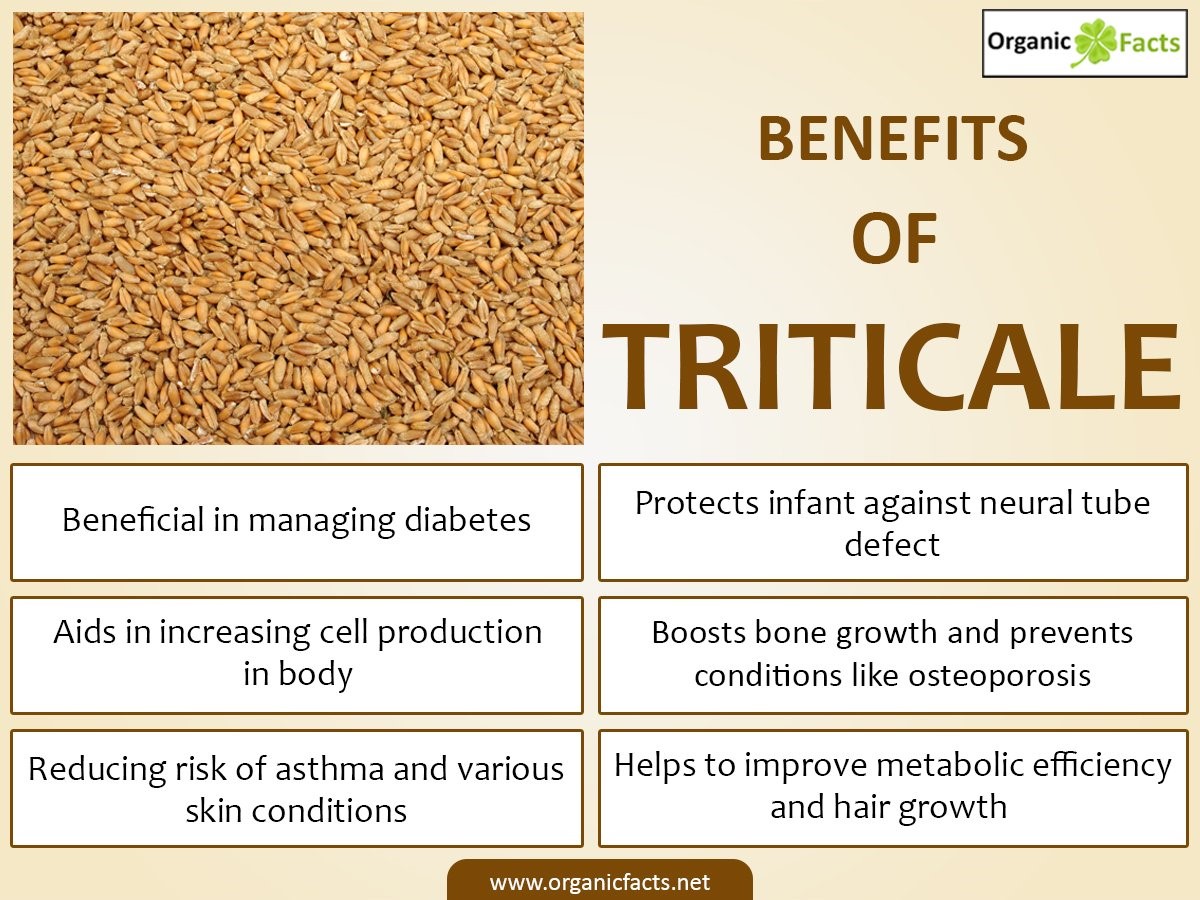