I wouldn’t be surprised if you haven’t heard of this grain called teff grain, especially if you’ve never visited southern Africa or enjoyed Ethiopian cuisine. However, this protein-rich staple food of that African nation has received a great deal of attention lately, as its high nutrient content, rapid cooking time, and versatile applications make it an ideal “superfood” that people from Hollywood to the Horn of Africa are clamouring for. Scientifically known as Eragrostis tef, this tiny grain is widely used in Africa but is beginning to gain popularity in the United States. It is used in a similar way as millet or quinoa, also popular for health food aficionados, but the grain’s small size means that it cooks very rapidly, thus using less fuel and being more viable as a dietary staple for countries with limited resources.  It’s amazing how many nutrients are packaged in such a small grain, but the mineral, vitamin, fibre, and organic compounds found in teff grain make it an ideal nutritional source for millions of people already. In fact, teff makes up 1/4 of all cereals grown in Ethiopia.

The most common use of teff is making flour and bread, but it can basically be used in the same way as any other cereal grain. In Ethiopian cuisine, injera bread (made from teff) is what the majority of large dishes are served on, and as Ethiopian cuisine has spread around the world, so too has knowledge and interest in teff. But why is it so important? What secret nutrients does it hold? Let’s take a closer look at the fascinating health benefits of teff grain.

With eight different amino acids, including a slightly rare one called lysine, teff can deliver substantial support for growth and development. Our bodies need protein to create new cells, repair old ones, and general development throughout our lives. Our bodies can more easily break down vegetable proteins into their constituent amino acids, which is why having something like teff in your diet is important for everyone, not just vegetarians and health food fans.

As the amount of people suffering from Celiac disease continues to rise, it will be important to have alternative options to gluten-containing foods. Celiac disease (gluten intolerance) can be very painful and dangerous for people who suffer from it, which is why gluten-free options like teff grain, particularly since it’s so nutrient-dense, make for healthy, delicious options for people avoiding gluten.

Teff contains a wide range of minerals and nutrients, but in terms of calcium, it is truly impressive. Calcium is an essential mineral for bone growth and development, and helps contribute to solid bone mineral density as we age. If you are susceptible to osteoporosis (perhaps due to lifestyle) or have a lack of calcium in your diet, than adding teff can help protect your bone integrity as you age.

Although most grains have a wealth of minerals, they aren’t as well known for having a significant level of vitamins, particularly of vitamin C. As you probably know, vitamin C is a crucial part of our immune system, as it stimulates the production and activity of white blood cells. However, vitamin C is also a key component in collagen, which is needed for the creation of new cells, blood vessels, organs, and muscle tissue. Together with the high protein content of teff grain, the vitamin C found in this useful dietary staple can have a significant impact on your overall health.

Speaking of minerals, the most unusually high mineral content comes in the form of iron. In fact, teff is commonly recommended for patients suffering from anaemia. Iron is a key element in our red blood cells, and when there is an iron deficiency in the body, weakness, dizziness, cognitive impairment, muscle cramps, and headaches can often follow (these are symptoms of anaemia). If you want to boost your circulation and increase oxygenation to important organ systems and areas of your body, then add some teff grain or injera bread to your diet immediately!

One of the side benefits that is often overlooked from teff grain is its ability to help diabetics manage their condition. By helping to slow the release of insulin into the bloodstream, teff can help diabetics prevent the dangerous spikes and plunges that can occur if you aren’t careful. This is partially due to the fibre content of teff grain, but there are more complex chemical pathways also at work in this regard, although research is still in the relatively early stages.

Teff grain has been known as an anti-inflammatory and menstrually soothing agent for generations, so if you tend to suffer from heavy menstrual flow, severe cramping, or other physical manifestations of the monthly event, adding teff to your diet could help reduce the severity and live in comfort.

Teff grain has been used for thousands of years as a laxative, or at least a means to speed up the digestive process. This is likely due to the high content of dietary fibre in the grain, which can bulk up stool, stimulate peristaltic motion, and increase the regularity and quality of your bowel movements. Dietary fibre is also able to balance cholesterol levels in the body by eliminating excess omega-6 fatty acids, in addition to relieving constipation, bloating, cramping, and more serious gastrointestinal issues.

Another mineral in high concentrations in teff grain is copper, which plays important roles throughout our body, including in energy production, growth and repair, enzymatic reactions, nervous system function, and red blood cell creation. Without proper copper levels, many of our body’s systems will begin to fail, so adding a copper boost with teff is never a bad idea.

Finally, teff grain has been shown to be very beneficial for heart health. The low sodium content ensures that the body doesn’t clog up the arteries too much, and the grain has been shown to effectively reduce blood pressure in research studies. This can reduce your chances of suffering from heart attacks or strokes, and reduce the overall strain on your cardiovascular system.

There is no known allergenic nature of teff grain, nor have side effects been reported with any consistency. In other words, it’s simply the best grain option out there, without any downside! 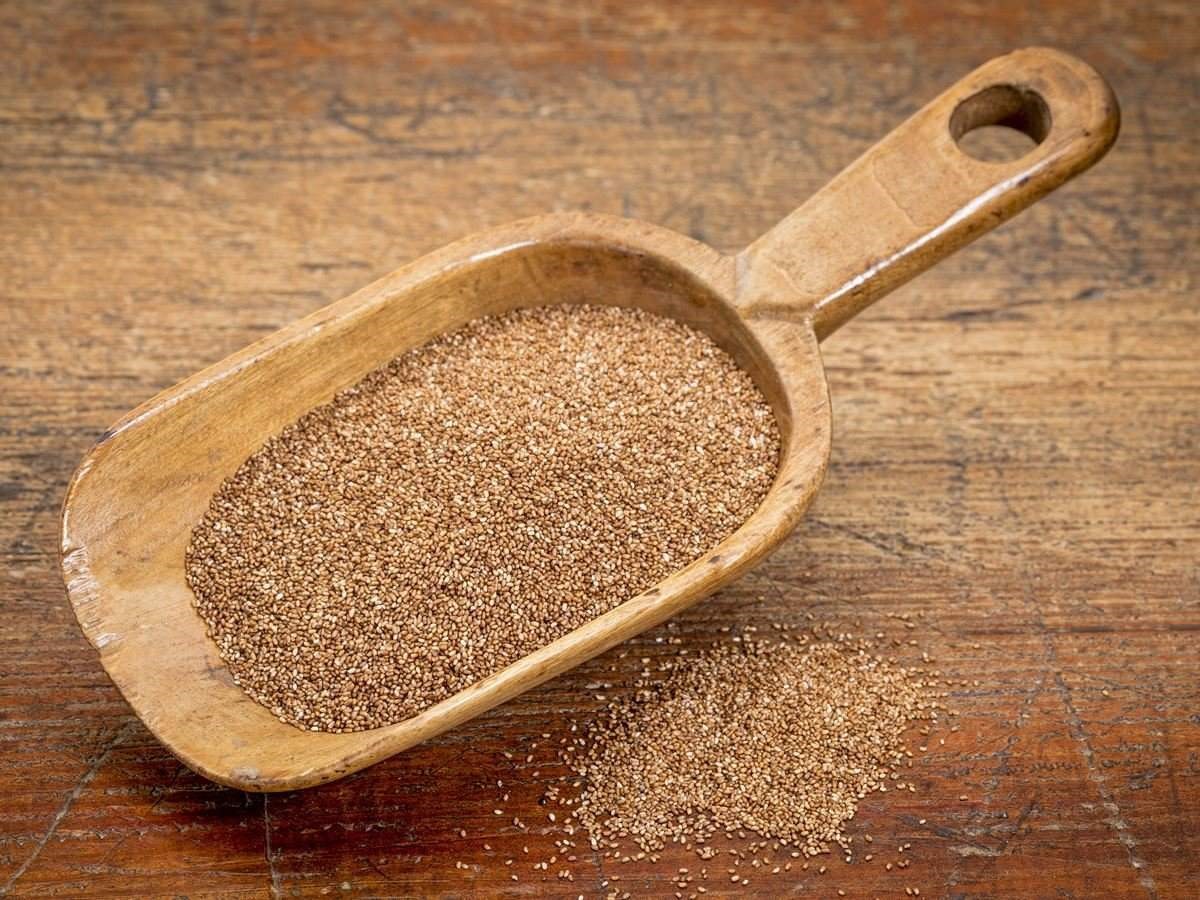