Sorghum is the broad term for an entire genus of grasses that are native to tropics and subtropics around the world. While there are more than 30 different species of sorghum, only one is harvested for human consumption, while the others are primarily used as fodder for animals. The important species for humans, Sorghum bicolor, is native to Africa, but can now be found all around the world as a staple food product. It is also cultivated in many different countries. Sorghum is primarily used in the production of sorghum molasses, sorghum syrup, and as a grain. Also, it can be used in the production of alcoholic beverages and even biofuels around the world. It is widely considered the fifth most important cereal crop in the world.

The versatility of sorghum, combined with the fact that it is acceptable for people with wheat allergies to eat, makes it extremely important as a staple crop in the world. Furthermore, the vast health benefits associated with sorghum make it a great alternative to other types of grains, grasses, and cereals that are commonly consumed across the globe. Let’s take a closer look at the nutrients that sorghum can provide us in our diet.

Nutritional Value of Sorghum
Sorghum is a powerhouse in terms of nutrients, and can provide those wise individuals who add it to their diet with vitamins like niacin, riboflavin, and thiamine, as well as high levels of magnesium, iron, copper, calcium, phosphorous, and potassium, as well as nearly half the daily required intake of protein and a very significant amount of dietary fibre (48% of the recommended intake).

It seems like many healthy foods contain some amount of dietary fibre, which greatly improves the functionality of the digestive system. However, sorghum is one of the best foods out there for dietary fibre. A single serving of sorghum contains 48% of your daily recommended intake of dietary fibre, more than 12 grams! That means that your digestive tract will keep your food moving along rapidly, preventing things like cramping, bloating, constipation, stomach aches, excess gas, and diarrhoea. Furthermore, excess amounts of fibre in the body helps to scrape off dangerous cholesterol (LDL), which helps to improve heart health and protect your body from conditions like atherosclerosis, heart attacks, and strokes.

The bran layer of the sorghum grains contain important antioxidants that are not found in many other types of food. These antioxidants have been directly connected to a reduced chance of developing various types of cancer, including oesophageal cancer, particularly in comparison to people who regularly eat wheat and corn. Antioxidants are the beneficial compounds that neutralize and eliminate free radicals in the body, which often cause healthy cells in the body to mutate into cancer cells.

Excessive carbohydrates break down into simple sugars and wreak havoc on the glucose levels in the body, leading to diabetes, or causing chaos for those people who already suffer from this disease. However, the tannin-rich bran of sorghum has enzymes that inhibit the absorption of starch by the body, which can help to regulate insulin and glucose levels in the body. By keeping these levels balanced, diabetics won’t suffer as many plunges and spikes in their glucose levels, thereby preventing diabetic shock and other health complications.

Although it is a relatively “new” condition, it seems to be gaining awareness all around the world. Celiac disease is a severe allergy to gluten, which is primarily found in wheat-based products. Surprisingly, wheat/gluten is found in thousands of normal food items, making life for those suffering from Celiac disease very difficult. Fortunately, alternative grains and grasses, such as sorghum, can be eaten safely by those suffering from this increasingly common condition, without the painful inflammation, nausea, and gastrointestinal damage that gluten causes.

Magnesium is found in high quantities in sorghum, which means that your calcium levels will be properly maintained, as magnesium increases calcium absorption in the body. These two minerals are also integral to the development of bone tissue and speeds up the healing of damaged or aging bones. This can prevent conditions like osteoporosis and arthritis, thereby keeping you active and healthy well into your old age.

Copper and Iron are also found in sorghum, and in a similar way as magnesium and calcium, copper helps to increase the uptake and absorption of iron into the body. This means a decreased likelihood of developing anaemia, which is another name for iron deficiency. With enough iron and copper in your system, red blood cell development is increased, thereby boosting circulation of the blood, stimulating cellular growth and repair, and increasing the hair growth of the scalp, while also boosting energy levels throughout the body. A single serving of sorghum contains 58% of your daily recommended intake of copper.

Niacin, also known as vitamin B3, is a key component in transforming food into usable energy and fuel for the body. Breaking down and metabolizing nutrients into energy will keep your energy levels stable throughout the day, rather than the cheap peaks and troughs that sugar boosts give you. Sorghum contains 28% of your recommended niacin intake per day!

There are no known concerns or cautions against adding sorghum to your diet. As it is a grass, there is the possibility of some people being allergic to it, but the cases of sorghum being allergenic are very rare. Furthermore, with the high content of certain minerals and vitamins, the only real danger is getting too much of a good thing, so eat sorghum in moderation and enjoy all the wonderful health benefits! 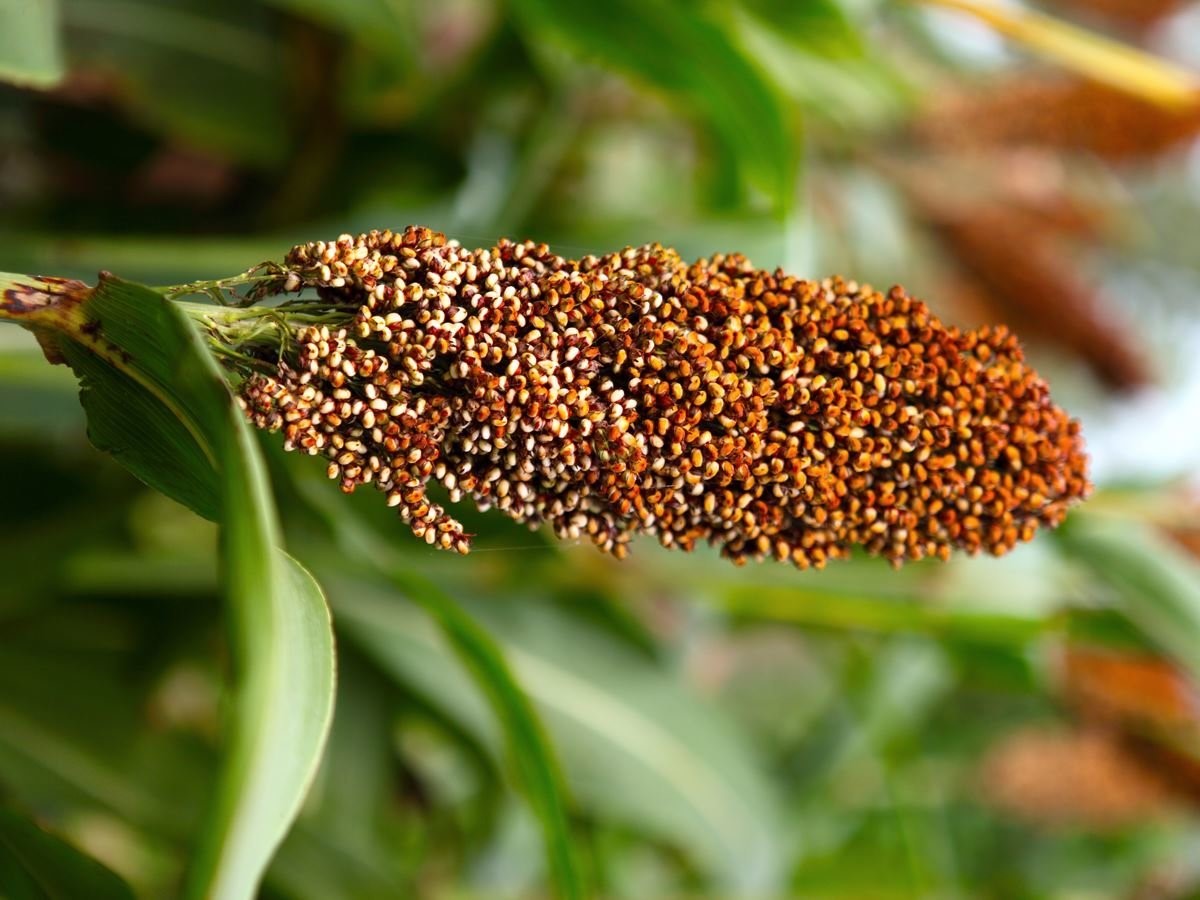 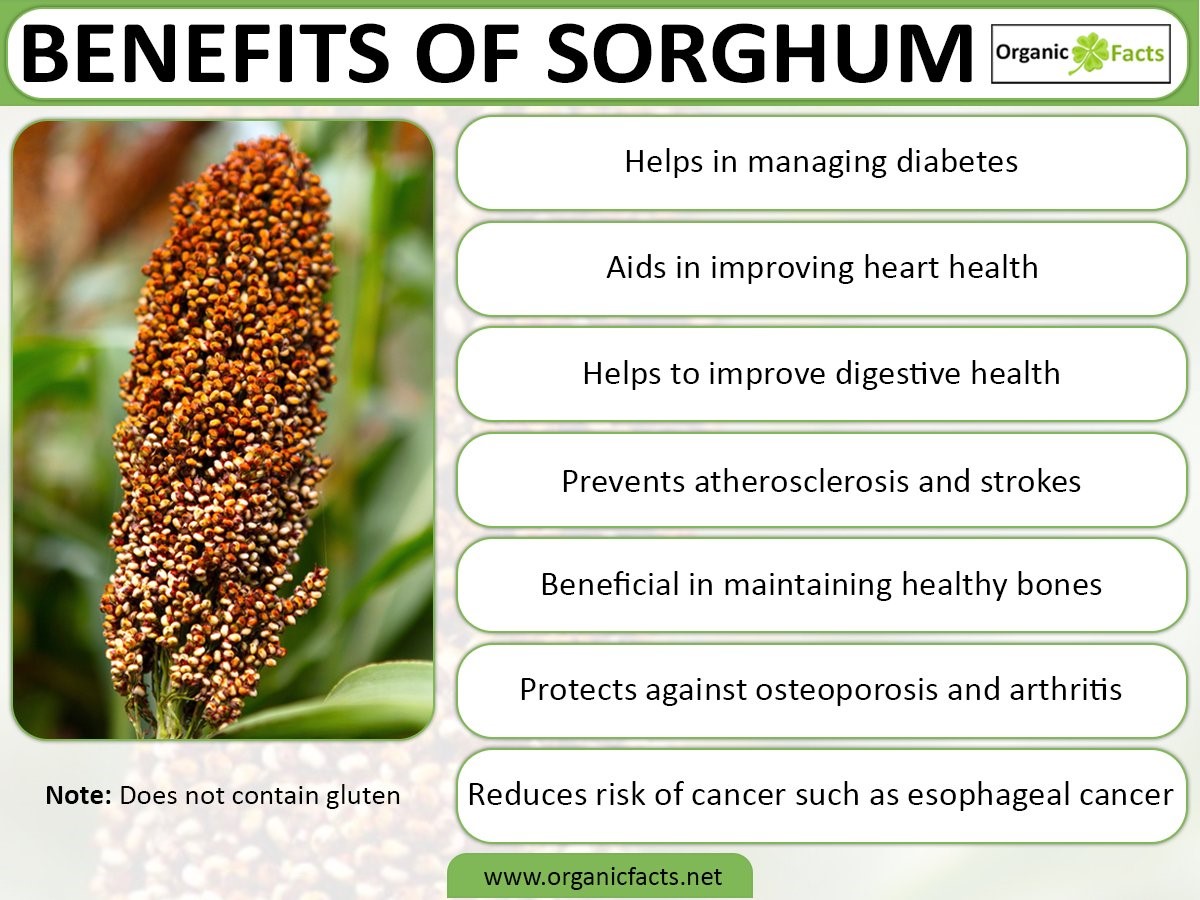