Some of the best health benefits of millet include its ability to protect your heart health, protect yourself from diabetes, improve your digestive system, lower your risk of cancer, detoxify the body, boost respiratory health, optimize your immune system, increase your energy levels, and improve your muscle and nerve health.

Millet may not be the most common type of seed crop that you’re expecting on your table, but in fact, this group of highly variable seeded grasses are cultivated throughout the world, both for livestock feed and human consumption. It is mainly grown in developing countries, but its quick growing season and ability to grow in relatively harsh, arid, dry environments makes it an ideal crop for many countries. Although there are many different varieties of millet grown around the world, the most common cultivar is Pennisetum glaucum, also known as pearl millet.  In terms of history, millet likely originated in Africa, but then spread through Asia and the Middle East as early as 10,000 years ago, as it seems that millet was already quite spread out by that point in ancient history. Their reliability to survive harsh conditions made them the perfect crop, and they are still preferred for that reason today.

These small grain plants are primarily produced in India, who cultivates over 8 million tons every years, followed by a number of larger African countries and China. Millet can be used as a traditional cereal, but can also be used in porridge, snacks, and other breads, as it is very high in starch, like most other grains. Millet is also a very good source of nutrients, vitamins, minerals, and organic compounds that can significantly boost human health in various ways. It is receiving an additional boost of attention in recent years, as Celiac disease seems to be a larger and more well-known condition. Millet is gluten-free, so Celiac sufferers can turn to millet as their source of grains, instead of wheat. In terms of basic food staples that are praised as the simplest and most valuable additions to diets around the world, millet provides e most energy, as well as the most fat and B-vitamins.

Millet is counted on around the world to provide basic nutrition for many developing nations. Millet is so important because of its uniquely high content of nutrients, including impressive starch levels, very high B-vitamin content, as well as calcium,  iron,  potassium,   zinc,  magnesium, not to mention being a healthy source of essential fats in the body. Furthermore, there are significant levels of protein and dietary fibre in millet as well, which contribute to even more health benefits of this important grain!

Millet is one of the best possible grains to add to your diet if you want to protect your heart, which is something that everyone can relate to. Millet is a rich source of magnesium, which is an important mineral for reducing blood pressure and the risk of heart attacks of strokes, particularly in the case of atherosclerosis. Millet is also a great source of potassium, which further keeps blood pressure low by acting as a vasodilator. Reducing your blood pressure and optimizing your circulatory system is one of the best ways to protect your cardiovascular health. Furthermore, the plant lignans found in millet can be converted to animal lignans by the microflora in our digestive system, and those animal lignans have been shown to protect against certain chronic diseases, like cancer and heart disease.

Diabetes is a disease found in millions of people around the world. Millet is a beneficial food staple in many developing countries (where diabetes is less frequently found), perhaps because one of the effects of millet is a reduced chance of Type 2 diabetes, thanks to the significant levels of magnesium found in this particular grain. Magnesium is considered one of the most important minerals for increasing the efficiency of insulin and glucose receptors in the body, thereby preventing this disease. A 30% reduction in diabetes has been seen in populations divided between diets with or without magnesium.

As most fibre-rich foods boast, millet can help move your gastrointestinal system along and eliminate problems like constipation, excess gas, bloating, and cramping. By regulating your digestive process, you also improve your nutrient retention and reduce your chance of more serious gastrointestinal conditions like gastric ulcers or colon cancer. Regular digestion and elimination of waste also helps to optimize your kidney, liver, and immune system health, as those organ systems are closely related to the body’s metabolic activities.

Recent research has revealed fibre to be one of the best and easiest ways to prevent the onset of breast cancer in women. In fact, women can reduce their chances of breast cancer by more than 50% by eating more than 30 grams of fibre every day. Given that breast cancer is one of the most common and deadliest forms of cancer, this is advice that every woman should hear!

Many of the antioxidants found in millet, in addition to their beneficial impact on neutralizing free radicals, which can cause cancer, they can also clean up other toxins from your body, such as those in your kidney and liver. Quercetin, curcumin, ellagic acid, and various other beneficial catechins can help to rid your system of any foreign agents and toxins by promoting proper excretion and neutralizing enzymatic activity in those organs.

Research has come to light showing that millet can significantly improve the quality of life for people suffering from childhood asthma, and can also prevent it from developing in the first place. Although some of the evidence is controversial, it is shown that significantly less wheezing and asthma attacks (by more than 15%) was seen in children who had large intakes of grains like millet. However, as wheat is a common allergen that is associated with asthma and wheezing, millet does not have the same components and does not have this negative effect.

Given the modern stresses on our body, particularly to our glandular system, the excessive work needed to properly digest and process millet may be damaging. Consider speaking to your doctor about your glandular and thyroid health before making a major shift to a millet-heavy diet. 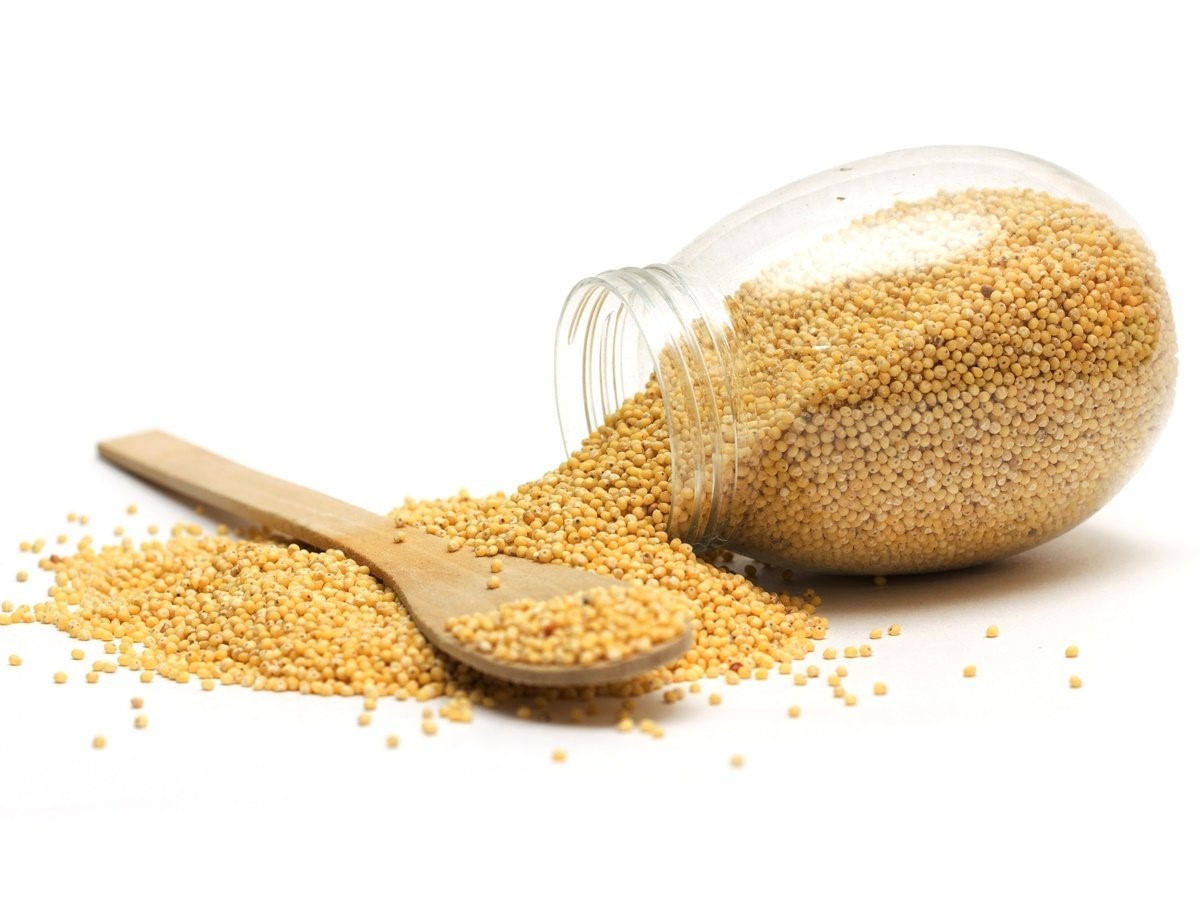 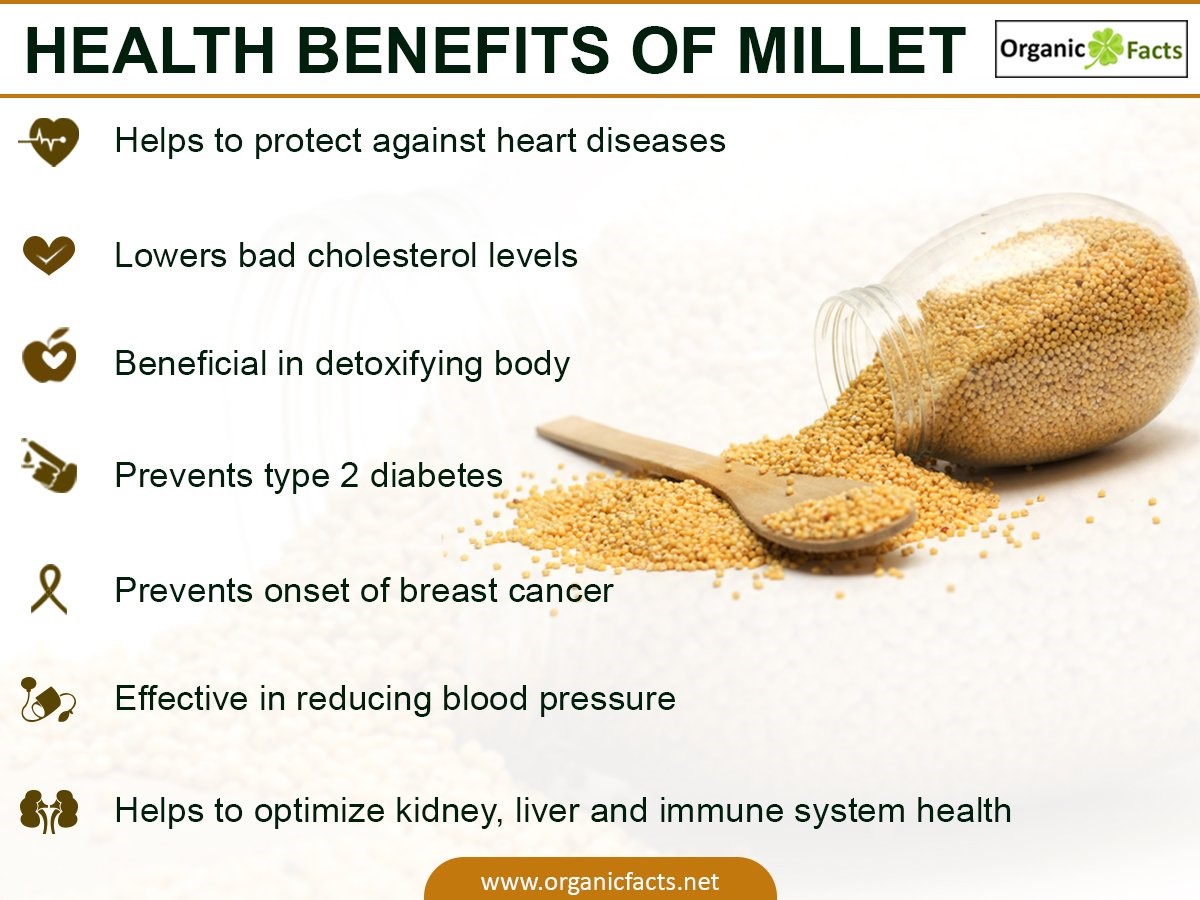