Buckwheat is a very useful plant source for a wealth of health benefits, including a reduction in blood pressure, prevention of certain types of cancer, management of diabetes, improved digestion, and cholesterol levels, boosted immune system, elimination of gallstones, protection from asthma attacks, and relief from constipation and other intestinal conditions. These benefits can mostly be attributed to the impressive range of proteins, minerals, antioxidants, and aromatic compounds found in buckwheat.

Despite its name, buckwheat is not related to wheat, nor is it a grass. It is related to rhubarb, and the part that people eat is best classified as a fruit seed that comes from the buckwheat plant, also commonly called the beech wheat plant. It derived its name because it is often used in the same way as wheat, despite the fact that it is gluten-free which is why it has risen to such importance in recent years, due to the increased awareness and infrastructure to support gluten allergies and people with Celiac disease.

Buckwheat belongs to the Polygonaceae family of plants, and was originally thought to have developed in Southeast Asia, and then gradually spread throughout the Asian continent over the past 8,000 years. There is another species variation of the plant that is found in the Himalayas.

It is still widely cultivated in Russia, China, and the Ukraine, but the United States, who used to grow large amounts of buckwheat, stopped with the advent of nitrogen fertilizer, which is better for growing wheat. Buckwheat has far more beneficial qualities than wheat, which is why so many people choose this delicious alternative to more traditional grains! Some of the most well-known and celebrated health benefits of buckwheat are explained below.

Recent studies about dietary fibre gained from fruit has powerful anti-carcinogenic effects, primarily on the development and metastasis of breast cancer cells in postmenopausal women. The most striking study showed that there was a 50% reduction in breast cancer frequency in women who regularly consumed the recommended amount of daily dietary fibre. There are also plant lignans in buckwheat which is converted in our stomachs into animal lignans. Animal lignans are integral in the defense against breast cancer and other hormone-based cancers.

The other major cancer benefit that buckwheat provides is for colon cancer, and as you may expect, it is for a similar reason as the above example. Fibre is known as one of the best ways to reduce your chances of getting colon cancer, because fibre helps to keep your intestinal tract clean, free of free radicals, and generally operating at a healthy level. Other cancers may benefit from the impact of buckwheat and fibre, but more research must be done. A single cup of buckwheat has more than 20% of your daily fibre recommendation, and has almost no calories.

One of the most important qualities of buckwheat is its high levels of phytonutrients, particularly flavonoids. These important compounds extend the functionality of vitamin-C and act as antioxidants within the body, which seek out and eliminate dangerous free radicals, the chemical by-product of cell metabolism that is known to cause diseases like cancer and heart disease. Rutin, one of the most important flavonoids found in buckwheat, lowers the amount of LDL cholesterol in the blood, and keep platelets from clotting, which can lead to atherosclerosis, heart attack, and stroke. Rutin also increases the level of HDL (good) cholesterol, which further reduces chances of cardiovascular disease.

Rutin is commonly extracted from the leaves of buckwheat and added to blood pressure medicines because it acts as a vasodilator that increases blood flow and, again, reduces the chances of various types of heart disease or stroke because blood does not clot as easily in open, freely flowing blood vessels and arteries.

People with diabetes that are unfamiliar with buckwheat now have another tool in the complex and constant management of that disease. The high level of dietary fibre in buckwheat is certainly one of the reasons why it helps diabetic patients, because it significantly lowers the amount of blood sugar, and does so very quickly as well, sometimes in as little as 1-2 hours. Buckwheat was shown to have a stronger effect on this than regular wheat flour.

This blood glucose-lowering effect stems from the presence of a compound called chiro-inositol, found in buckwheat. This is a vital secondary messenger for insulin signal transduction. Basically, chiro-inositol mimics the appearance and chemical functionality of insulin and makes them more sensitive to insulin presence. This has proven very beneficial for patients who have Type 1 Diabetes, and further research is being done on other types of diabetes. Furthermore, buckwheat, along with other types of whole grains are great sources of magnesium, which is an essential part of nearly 300 enzymes in the human body, including those that affect the body’s use of glucose and insulin formation and release. High levels of magnesium have been associated with a reduced risk of Type 2 diabetes, so buckwheat has both major types covered!

In terms of digestive aids, buckwheat is one of the best plants out there! Buckwheat has a high level of fibre, which adds bulk to your bowel movements, helping to move them through the digestive tract, and stimulating peristaltic motion, the muscle contraction of your intestines. Fibre can also help keep your bowel movements consistent, and reduce your chances of more serious gastrointestinal issues, even colon and gastric cancer. It can also help to reduce irritable bowel syndrome and diarrhoea in certain patients. Secondly, its large bulk versus actual caloric impact makes it a food that you don’t need to limit yourself on in terms of amount. Not that you will need to worry, since buckwheat also acts as an appetite suppressant, and reduces your chances of overeating. Regular consumption of meals results in more regular bowel movements, and a generally health digestive system.

Buckwheat has a long list of attributes, and its impact on the immune system is one of the most important! We have mentioned the importance of scavenging free radicals in an effort to protect the body from a variety of diseases, and buckwheat has antioxidant components which are excellent at finding and eliminating free radicals, such as tocopherols, phenolic acid, selenium and flavonoids. These compounds are found in high levels in the extract of buckwheat seed, far higher than in other grains or comparable seeds. They boost the activity of other antioxidants like vitamin-C and protect the organ systems from free radicals, such as eliminating the presence of LDL cholesterol, or binding with neural receptor sites so free radicals are unable to.

Buckwheat is one of those valuable foods that contain high-quality proteins, meaning that it has all eight essential amino acids, including lysine. High-quality proteins are vital to several different functions in the body, so food containing complete proteins not only replaces the need to eat red meat (priceless for vegetarians and vegans), but also gets the benefits from those proteins faster. Some of the benefits that complete proteins have are there ability to help you lose weight by satisfying your appetite faster and replacing the need for empty carbohydrates. They provide extra energy boosts and studies have shown that they increase cognitive ability. Finally, they help slow down the natural decrease in muscle strength and mass, called sarcopenia. Studies have shown complete proteins help people dramatically slow down the loss of bone and muscle mass, lending greater strength, durability, and endurance during physical activity!

Buckwheat is rich in insoluble fibre, which we have already mentioned, which also means that it greatly decreases the chances of developing gallstones! Insoluble fibre not only increases transit time of food through the digestive tract, but also reduces the need for excess secretion of bile acids. When too much bile acid is created, the chances of developing gallstones is much higher, so a steady intake of insoluble fibre in the diet can protect your gallbladder! Most research has thus far been done on animals, but early research on humans has also shown a positive correlation.

The magnesium and vitamin E levels in buckwheat are both strong enough to support the claim that buckwheat protects children from developing asthma. Studies show that children who don’t receive high levels of grains or grain-like foods are much more likely to develop asthma because they are deficient in certain anti-inflammatory nutrients, like vitamin E and magnesium.

Buckwheat is rich in selenium and zinc, both of which are essential trace minerals that the body needs to form strong bones and to continue to regrow damaged or degraded bones as we age. Also, selenium benefits the strength of teeth and nails as well!

Buckwheat is very high in iron content, and this vital element is one of the key components in the formation of red blood cells. A deficiency in iron can lead to anaemia, which is a complicated condition characterized by fatigue, cognitive slowness, headaches, and even other, more serious side effects. Adding buckwheat to your diet can eliminate your chances of anaemia and keep your blood flowing!

A Few Words of Caution:

Since buckwheat is not a wildly common alternative in some parts of the world, it is possible that you have never encountered it before, and have an unknown allergy to it. Some people can also develop an allergy to buckwheat after prolonged exposure. Speak to your doctor before adding any new foods to your diet in a consistent way, and be aware that buckwheat can be an allergen to some people. The allergic reactions can be serious, ranging from a runny nose and some intestinal discomfort to anaphylactic shock and death. Just be careful, and stay healthy! 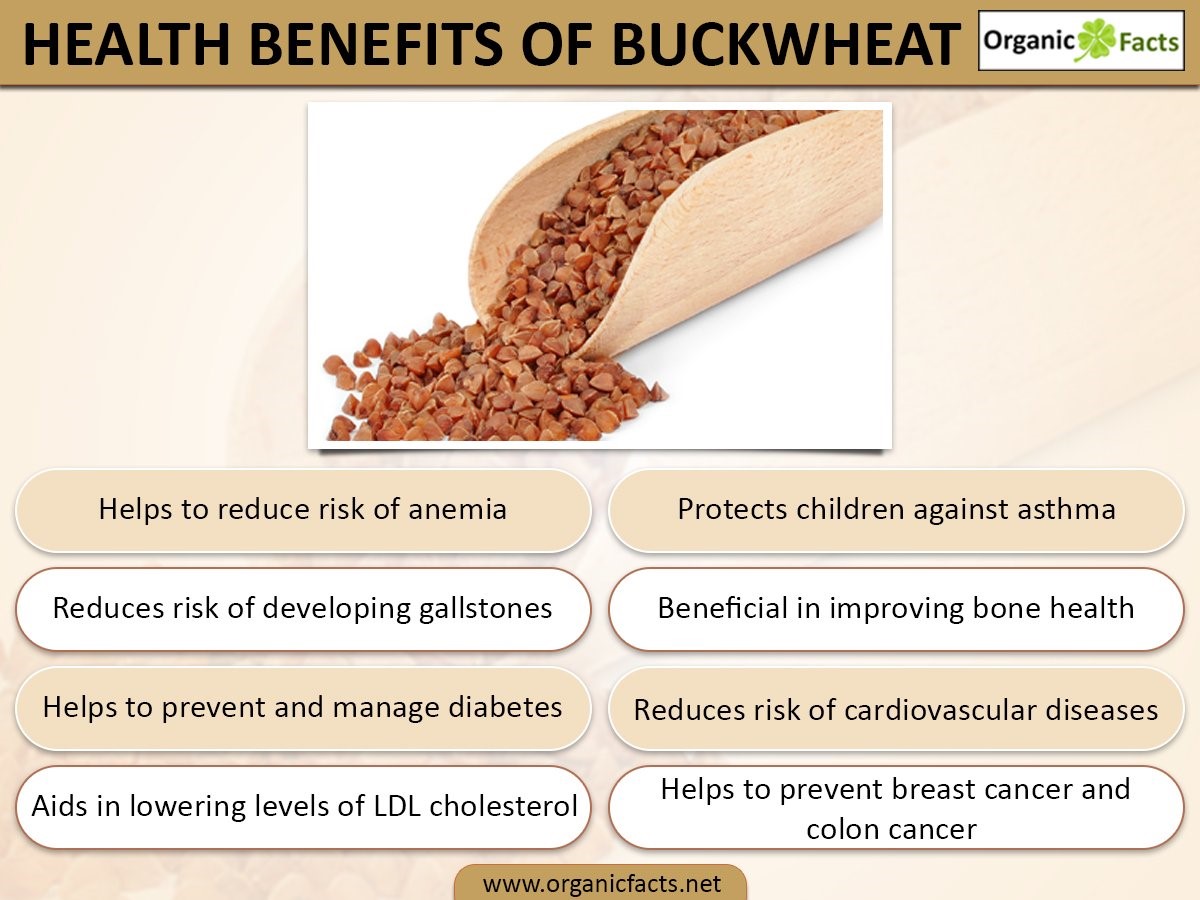