If you are having a difficult time suffering from asthma, arthritis, impotence, skin problems, anaemia, obesity, constipation, diabetes, hypertension, kidney problems or heart disease, perhaps it’s time for you to learn about the health benefits of barley. Recent research says that consuming whole grain barley regulates blood sugar to a great extent. The health benefits of barley are mostly attributable to the eight essential amino acids which it contains, meaning that it represents a complete protein in our diet.

There are so many rampant ailments in recent years, which proves even more that our regular diets lack important nutrients. One of the most important nutrients that we often tend to neglect is fibre. Barley is an excellent source of both soluble and insoluble fibre, which assures you good overall health over the long term.

Before we move on to the health benefits of barley, you will be pleased to know that you can consume it in many kinds of preparations like salads, soups, stew, and even with chicken, mutton or in the tandoori style. Therefore, it will not add value just to your health but also to your palate.

Barley, being an excellent source of fibre, keeps your body toxin-free. Its grass, which is rich in dietary fibre, acts as a fuel source to the friendly bacteria of our large intestine. These bacteria help in fermenting the fibre content of the barley, thereby forming butyric acid, which is the primary fuel for intestinal cells. It is greatly effective in maintaining a healthy colon. By keeping the intestine in proper health, barley helps you to decrease the movement time of faeces and keeps your stomach clean. It greatly reduces the chances of colon cancer and haemorrhoids as well.

Barley effectively helps women avoid developing gallstones. Since it is rich in insoluble fibre, it helps you to reduce bile acid secretion, thereby increasing insulin sensitivity and lowering the levels of triglycerides. Reportedly, in an article of the American Journal of Gastroenterology, women have a 17% lower risk of having gallstones as compared to others not consuming a fibrous diet.

The phosphorus and copper content in barley grass guarantees overall good health of bones. The phosphorous content in barley effectively cures bone and tooth ailments. If you have osteoporosis, it can be your natural remedy. Barley grass juice is known to have 11x greater calcium content than milk. Calcium, as we know, is one of the key components in protecting bone health.  The manganese content in barley works in association with B-complex vitamins, thereby keeping the overall health intact. We need manganese for normal bone production, as well as in cases of iron deficiency anaemia.

The vitamin C content in barley is almost twice than that of oranges. This vitamin particularly strengthens your immune system and reduces the chances of cold and flu. Iron improves the blood volume and prevents anaemia and fatigue. It aids in proper kidney functioning and the development of body cells. Furthermore, it contains copper, which forms haemoglobin and red blood cells.

Barley is a good source of Selenium, which helps you to preserve skin elasticity, thereby protecting it against free radical damage and loosening. Moreover, it also improves our heart, pancreas, and immune system functioning. A deficiency of selenium can lead to cancers of the skin, colon, prostate, liver, stomach, and breast.

Barley’s insoluble fibre yields propionic acid that helps keep the blood cholesterol levels low. It, being an excellent source of both soluble and insoluble fibres, is also specifically recommended by doctors for its naturally low-fat content and zero cholesterol properties.

Barley works effectively on Type 2 diabetes. However, we can prevent this type of diabetes by losing weight, getting involved in vigorous physical activity and including abundant whole grains in our diet. Therefore, high fibre foods like barley should be included in the daily diet of diabetic patients. Its grain has all the essential vitamins and minerals, particularly beta-glucan soluble fibre, that slows down glucose absorption.  The December 2006 edition of Nutrition Research has proved that insulin-resistant men who consumed barley beta-glucan soluble fibre had significantly reduced glucose and insulin levels as compared to others test subjects.

Barley contains certain types of phytonutrients known as plant lignans, which are transformed by friendly flora in our intestines into mammalian lignans. One of these new lignans is called enterolactone, which helps us to prevent breast and other hormonal cancers as well as coronary or heart disease.

Atherosclerosis is a condition when the artery walls thicken due to the coagulation or deposition of fatty materials like cholesterol. Barley contains niacin (a B vitamin complex) that reduces the overall cholesterol and lipoprotein levels and minimizes cardiovascular risk factors. Postmenopausal women having high blood pressure, high cholesterol, or cardiovascular diseases are specifically recommended to have barley at least 6 times a week.

14.5 kDa is a barley endosperm protein and a major allergen in baker’s asthma disease. This is an airborne occupational ailment, mostly prevalent in confectioneries and bakeries. It proves to be very effective preventative measure for such kinds of major wheat-flour allergens.

When you think of buying it, you first need to decide what form you should buy. It is found in various forms, and each of them has varied nutritional value. Whole grain barley has the ultimate nutritional value, found in its grain, leaves and even the extract of the grass.

Is the seedling of the barley plant. This grass is usually harvested about 200 days after germination, while the shoots are not even a foot tall. People consume it in this form because the young leaves are rich in minerals, vitamins, antioxidants, and amino acids. Although barley grains have much more dietary fibre in comparison, the grass has high levels of chlorophyll that detoxifies your body from harmful toxins.

Is also known as covered barley and is usually eaten after removing the inedible, fibrous outer hull. Once the hull is removed, it’s known as dehulled, pot or scotch barley. Hulled barley is a great source of healthy nutrients. It takes a long time to soak when used in regular cooking. However, the time is worth it, considering the utility of dehulled barley when you’re finished. Dehulled barley is commercially popular as pearl barley, and is a very marketable product. The process of removing the bran and polishing is known as “pearling”.

Is easily available in the grocery stores and probably one of the most common ingredients for breakfast and snacks recipes all over the world. These are hulled barley that is processed and the bran is removed. This is processed into a host of barley products like flours and flakes, which resemble oatmeal or grits.

Is well known for its medicinal benefits. It is the powder form of barley grass, sometimes mixed with additional vitamins and minerals. Today, many companies sell barley powder that comes from pure barley grass. These grasses are found in a variety of flavours and have superior solubility. Therefore, you can also consume them as barley juice.

Is often used alternatively as wheat flour or cake flour. The flour found from whole barley is richer in nutrition than the pearl variety flour since the bran in the former form remains undamaged. This non-wheat flour is obtained from grinding whole barley. It contains some gluten and has been very popular in confectioneries that tend to experiment with alternate kinds of flours. It has a mild, nutty flavour, and this flour has comparatively lower rates of calories and higher levels of fibre.

Is effective when your kidneys need rest from excessive stress. People suffering from kidney and bladder ailments can take barley water for therapeutic uses.

Barley is widely available as a commercial product all over the world in various forms. You need to know the exact form that will cater best to your needs. The pearled, flaked and hulled forms have different utilities, so decide what you want to make before making the purchase.

Barley is found both in bulk containers and packaged form; ensure its freshness before taking it home. If you buy it in containers, check the date and be sure that it’s sealed properly. Even a small amount of moisture content in packaged barley can spoil the cereal, so be careful if buying it in containers. Store it in clean, glass containers having air tight covers and place it in a cool, dry place. During the summer, it’s advisable to keep it in the refrigerator. 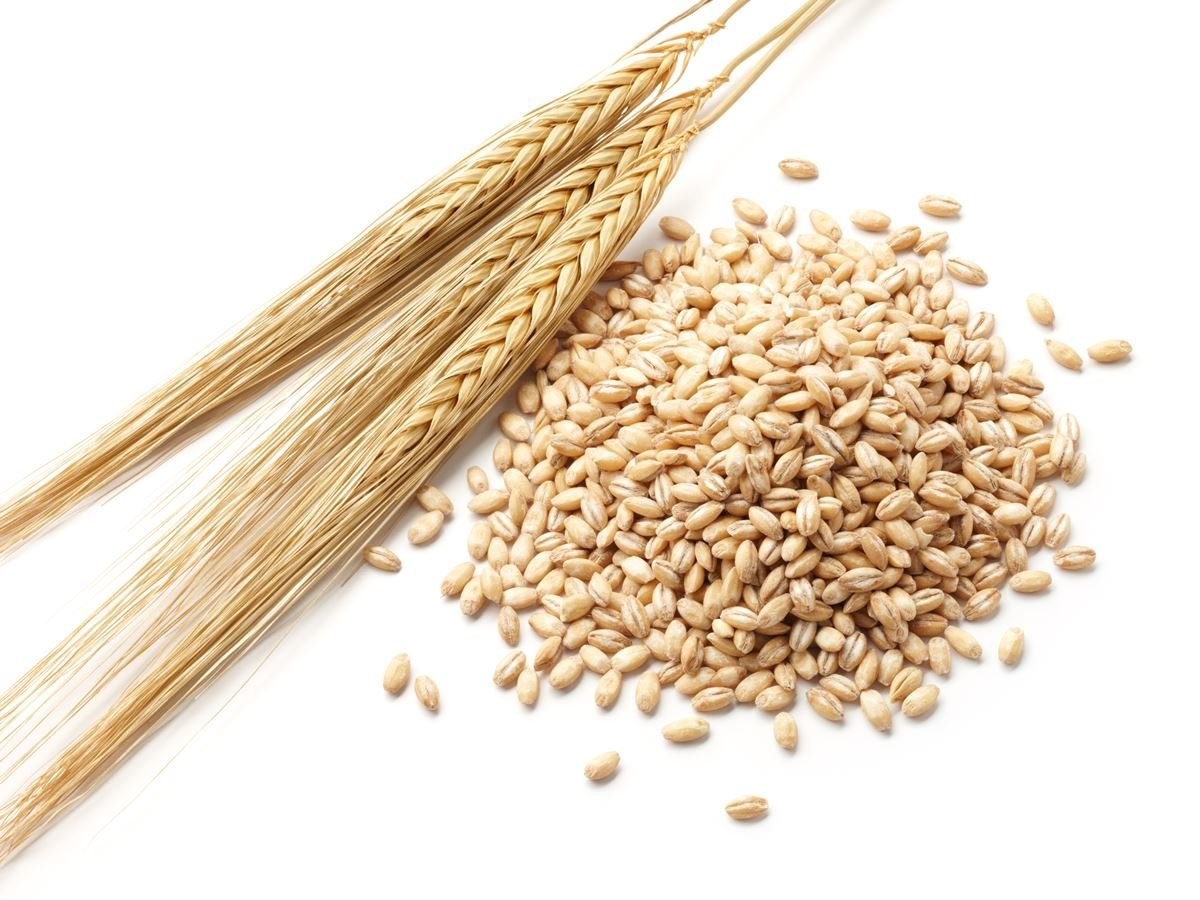 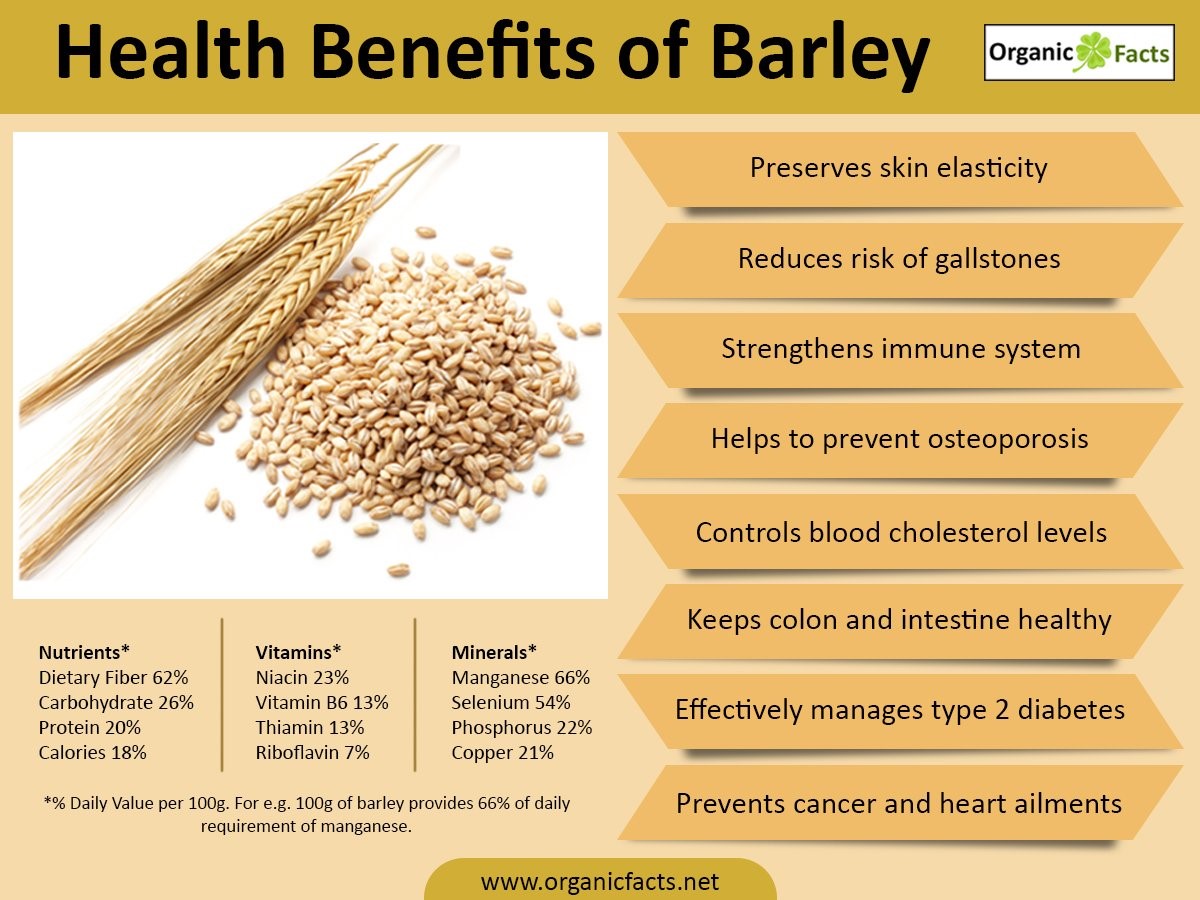